I am a potter. I start just by making, rather than having a concept in my head.

Sometimes there is a form that haunts me a bit, a shape or thought-image that wants to  come through. And then I do my best to get the technical skills to give those shapes  form.

When you start out learning pottery, you make a lot of pots! The process is all about  repetition. Weigh the clay, form it into a ball, throw it on the wheel, trim it, let dry, sand,  bisque fire, glaze and fire again. You throw 1000 cups to try and approach the perfect  cup. Repetition is the only way to get the technique.

It’s nice because that repetitive process becomes a kind of meditation, a way to get out  of your head and to start thinking with your hands.

So when I was starting, while I was throwing those 1000 cups, something about that  repetitive process began to make its way into the content of the work. I would repeatedly  make pots and then put repeating patterns all over the surface…dots, shapes, bananas  over everything, which evolved into painting pots on pots, these landscapes of pots…

When it came time to do this show, I realized I already had a blueprint for the installation.  I’ve been drawing these landscapes of pots on pots for years. It took a long time for  them to make a leap into their own form here on these tables. The work builds on itself  and evolves. 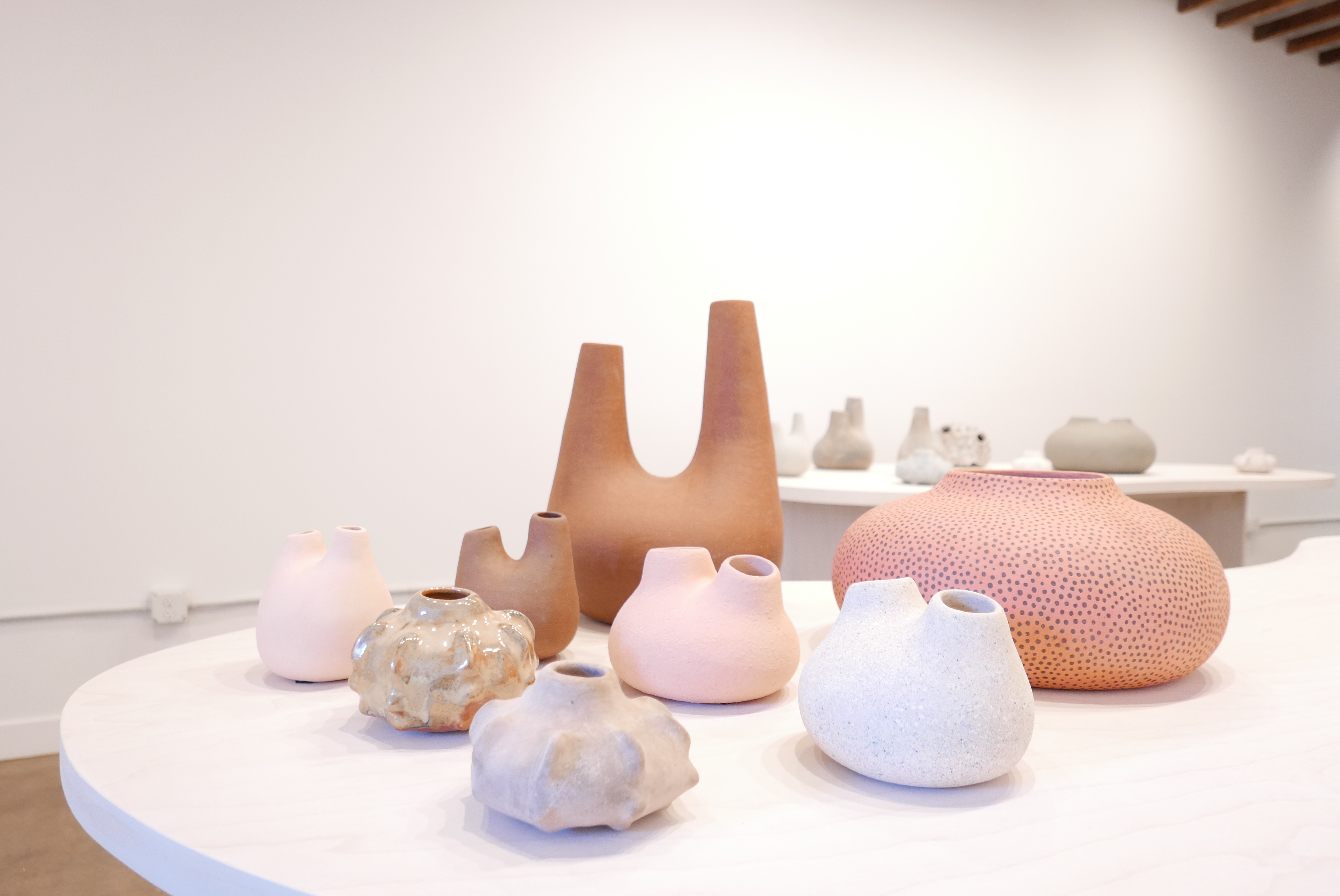 While I was preparing for this talk, a moment from my childhood kept coming to mind, so  I’ll share the story here:

When I was about 7 or 8, my family lived in Nigeria. My parents worked at the American  International School in Lagos, and for Christmas vacation we went on group trip to Egypt  and Israel with all the teachers’ families. At the time I was a gymnastics enthusiast and a  big Mary Lou Retton fan. I’d recently gotten my hair cut short in homage to her, kind of  like it is today.

In Jerusalem, we did all the tourist things, including visiting the Wailing Wall or Western  Wall as it’s known today, one of the holiest sites for prayer in the Jewish faith. The  Wailing Wall has a section just for men, and as we lined up to enter the gate, a guide  handed me a yarmulke for my short-haired head and ushered me into the men’s section  with my father.

This was THRILLING. It felt like I was floating, like some kind of superpower. I remember  seeing the devout men bobbing at the wall in prayer, and I remember seeing people tuck their folded prayers into the crevices of the stones. But more than anything I remember  that feeling in my body of exhilarating expansion. In an instant I had a new world open  up to me.

I found out in that moment, that it was possible TO CHANGE GENDER AND TO  ACCESS A SPACE – and in this case a sacred space – that was forbidden to me, a  space I didn’t realize was there before. And behind that revelation, I understood that  there was some unseen power that had created that space, and made it exclusive (so I  was kinda mad too).

I think this story came to mind when I was preparing for this talk because there is  something this work is trying to tell me about that knowledge. In that moment, I found out  there is some fluidity to our gendered embodiment and that there are adjacent and unknown spaces all around us.

Ceramics is ALSO about fluidity and form. Ceramics – and this vernacular of the vessel  – is about defining, containing and holding space, interior and exterior. And the vessel  has always been about the womb. That historic metaphor – woman as vessel – looms  large in my thinking, particularly in these newest snork forms – the ones with the multiple  holes. The ponies and bivalves…these organs. 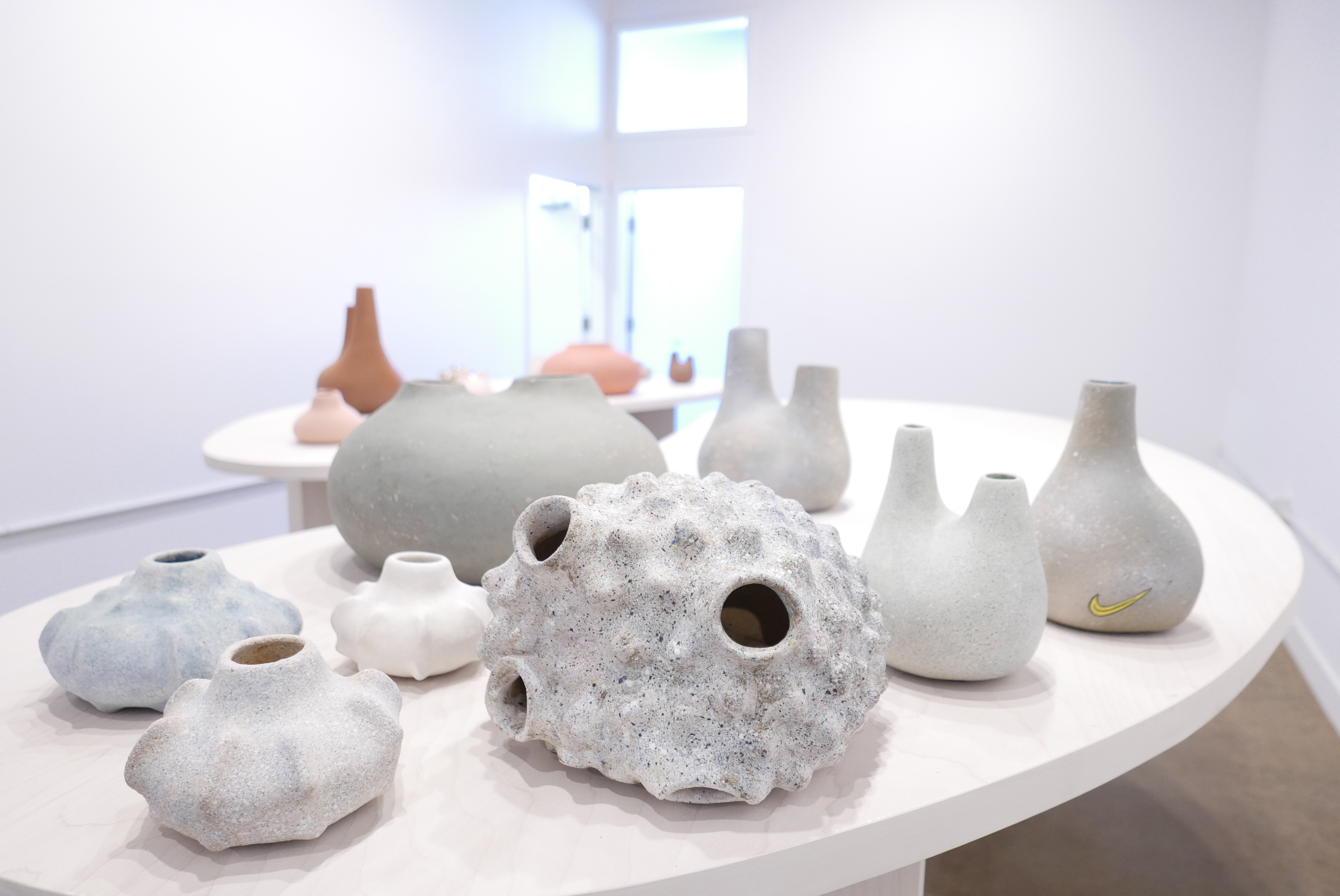 ‘Whitesnake’ became the organizing principle as I prepared for the show.

I’d been seeing a lot of snakes in the world around me. Snakes are memeing out lately,  in the instagram feed, in the marketplace. They are a design cliché, like ‘put a bird on it.’

I had also been researching Filipino mythology – my mom is from the Philippines – and I  came across this serpent-like creature called the Bakunawa, believed to cause  earthquakes and create eclipses by eating the sun or moon. It’s a bringer of earth shattering change. I liked this idea, and made some pieces with a literal white snake on  them, in reference to the Bakunawa.

But then it seemed wrong to include those pieces. Right now, for me, Whitesnake is  more accurately an invisible force, something all around us. It’s the air we breathe, the  water we swim in. Patriarchy, white supremacy.

Whitesnake is my shorthand for patriarchy, but it also vacillates in meaning and  reference. It’s an 80s hair band (itself a site of lovely gender contortions) and a Chinese  myth of a snake deity that disguises itself expertly as a woman for 1000 years, in order  to learn of love and human feeling. You might have seen Greensnake, the Maggie  Cheung movie that deals with this myth.

So Whitesnake’s meaning changes as she moves through different stories. These  ceramic works could be her eggs, resting in her lair.

But as that patriarchal energy, Whitesnake lurches through our veins, lashing out.  Injured and angry. Patriarchal power is endangered, it is dying.

And in the space of the studio, I can midwife that death and transformation. I can be a  kind of death doula for patriarchy, taking its information, its messages and transforming  them by fire.

At a fundamental level, ceramics is out of your control. It is by nature a collaboration with  outside forces – heat, moisture, gravity, chemistry. It is that process of forming and  transforming. It really invites you to get shamanistic with it. Perhaps ceramics can  collaborate with outside cultural forces too --- memes, paradigms, brands, the zeitgeist… 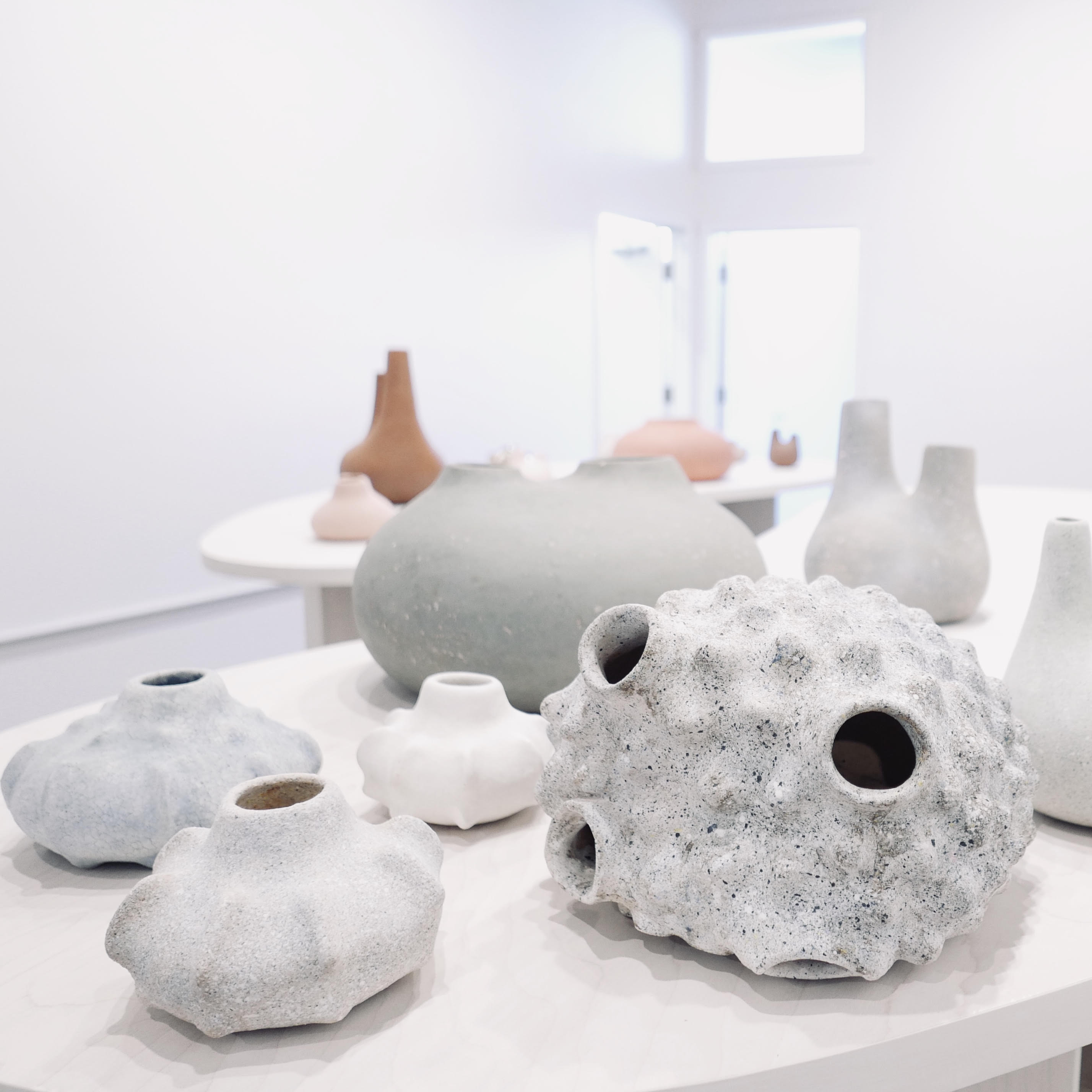 I’ve been using the banana motif in my work for a long time, as something decorative  and repetitive. Through repetition, it became a symbol for me, for the homogenizing  impulses of patriarchy. These are Cavendish bananas, the ones bred to the exclusion of  others for our consumption, the one that became our archetypal banana, from Carmen  Miranda to Warhol to Cattelan just this past weekend.

As I was working, the banana blinked and took the form of the Nike swoosh, to my  surprise. The Nike logo, that little hook in our collective consciousness and sub consciousness, unhooked itself and demanded processing. I wanted to let it loose to  change meaning, flicker into something else. What is this shape?..In nature, in  architecture, a wave, an undulation. Carolyn Davidson, the woman who designed the  logo, was charged with creating something that connoted movement. Now it has evolved  into a status code that communicates something like bodily sovereignty – the ownership  and mastery of your physical being.

The act of putting a logo on this handmade thing was a little upsetting for me to take on.  It’s using something that’s not mine, but then it kind of IS mine. The banana, signifier of  homogenizing patriarchy, jumped into this familiar, other form, and seemed somehow  related. It felt like it was an omen, of a big change coming, like a snake eating the sun.  That jump, that movement, made me see that Logos are capable of housing other  entities.

So I started applying it to pots in what I think of as a tramp stamp, a relatively recent  patriarchal shaming device. The swoosh is the idea of a perfect curve on the imperfect  curve of the pot. The curves arc like the path of a snake, like the lane between these  tables. Form conditions space, in the same way that ideology, power, and culture condition space. I put my attention to the striving imperfection of the curves. And I invite  you to go ahead and feel their curves, their little cellulite…

I love these vessels. As image thoughts they exert a deep pull on me and I do my best to  give them form. That’s my process in a nutshell. But after that, it’s not really about the  objects… it’s about the feeling in your body when you see or touch it. I guess that is  what is called affect, the feeling of emotion in the body. That feeling opens up a channel,  the vessel opens up a space. A space between you and me. And we can rearrange  ourselves around that space.